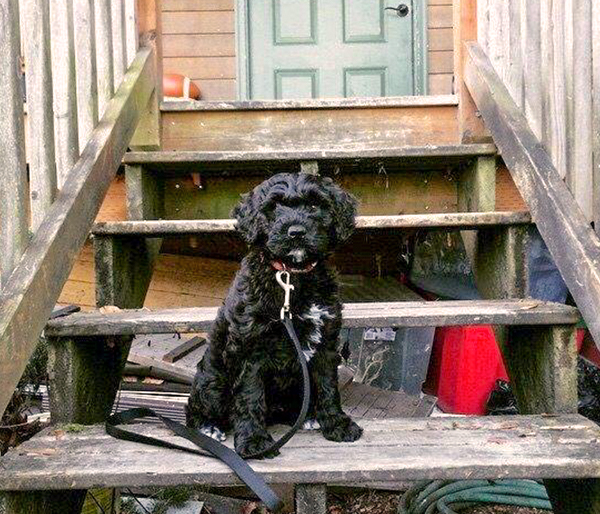 Dr. Casal and her fellow researchers at UPENN are pleased to report their data now provides them with a marker test for Puppy Eye Syndrome. UPENN will be able to offer this gene test to breeders the beginning of 2020. Prices will be announced before the end of the year.

Additional details of this exciting development in their work are provided in their end-year 2 research update.

Study Objectives
The objective of this study is to A) clinicopathologically and molecularly characterize microphthalmia with delayed growth in the Portuguese Water Dog (POWD) and B) develop a DNA-based test to assist breeders with their breeding programs and avoid producing affected dogs.

Results
Objective A is over 95% complete. A draft of the paper describing the clinicopathological findings had been written but we found more data on affected puppies, which were added to the paper. A paper was published about microphthalmia in PWDs recently by a group out of Cornell. However, this paper described only the ocular changes in affected dogs. With our publication, we will show that there can be other abnormalities such as low platelet counts and stunted growth, which makes this a truly syndromic disorder. We have also included pedigree analyses showing the autosomal recessive mode of inheritance. In the meantime, we have decided to put all of the clinical data into the final paper describing the disease-causing variant, making this a large landmark paper.

For Objective B, we received enough DNA samples from affected dogs and their relatives to perform an initial genome wide association study (GWAS). The DNA was sent to Illumina (Neogen) the end of November 2018, and we received the results as expected in January 2019.

We are absolutely thrilled with the results: A single, very significant peak was seen on the “Manhattan plot”, which allows us to locate not only the chromosome but the general area of that chromosome in which the gene must be located. Indeed, there is a gene in this area that, when mutated in mice and humans, causes a microphthalmia-like syndrome.

We sequenced this gene and did not find a clear disease-causing variant. Thus, we submitted and sequenced the entire genome of one affected dog and one normal PWD. This allowed us to find a variant in a gene that is important for the development of the eye, and this variant is not present in any of the normal dogs including dogs of other breeds.

We believe that this marker may be the main culprit, but we will have to perform more experiments to rule this candidate variant in or out as the causative mutation. Nevertheless, this data now provides us with a marker test that we will be able to offer to breeders the beginning of 2020. We are very excited over our discovery and to be able to offer a test for breeders. Prices will be announced before the end of the year.

End-year 2 Research Update Dr. Casal to characterize the genetic component of the microphthalmia and delayed growth syndrome in the PWD