Splash came to us as a 5-year-old who had become “persona non grata” at his first home due to his exuberant nature and large size.. He knew little about being a house dog but quickly became our protector and good friend. Although he never learned the “no shopping on countertop rule”, he learned new lessons and earned his titles to the amazement of our friends. More gradually, he learned to hunt squirrels, run and do other doggie things that had been disallowed.

He was a great ham. He always did better at a show than in practice and was a kind and gentle boy. Being on the large side, I was worried when he first started at nursing homes as a therapy dog but he seemed to understand the frail nature of the folks there and was much loved by all the residents. He even had a trick to show off, sitting up like a circus dog. He amazed me earning his WWD by ignoring a tasty duck on the way to his floating line and ended up 3rd in superdog at the San Rafel specialty. He was a BIG chow hound.

Splash loved everyone and could not get enough cuddles to make up for his first years. At age 13 he had to undergo surgery for osteosarcoma of the hard palette but he battled back quickly and lived 2 ½ more years dining in style on soft food and getting quite spoiled. We only wish we had had even more time with this great fellow. 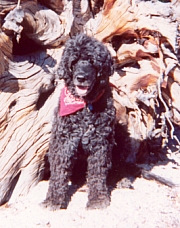